[All photographs copyright, Gary Nunn 2012] – Grabbed a quick lunch today at the Fresh & Easy supermarket in Oceanside where the Scissor-tailed Flycatcher has been reported. While sitting back in my camp chair munching on an egg-salad sandwich I noticed some larger diurnal migrants using the updraft from the ridge behind the store to travel south. First surprise were two American White Pelican booking south cross-wind. Then a few minutes later things got really interesting when a Zone-tailed Hawk Buteo albonotatus came by with a cawing American Crow tied on its tail. I managed a few documentation photographs as it circled higher over the mobile home park south of the train tracks.

When I first saw this large black avian object coming towards me I thought it might be a Turkey Vulture but the general impression of the bird was not right. The body was too large in the rear and the tail too stout looking. In addition the aggressive mobbing of the crow was a dead giveaway that this was something else a bit more dangerous to smaller game. Going by me overhead it showed off the wide white bar on the mid-tail and contrasting paler coloration of the secondaries and primaries. Also very noticeable were the powerful large yellow feet, got to have something to crush to death those poor ground-squirrels, and the yellow cere on the bill was visible as it veered around circling. 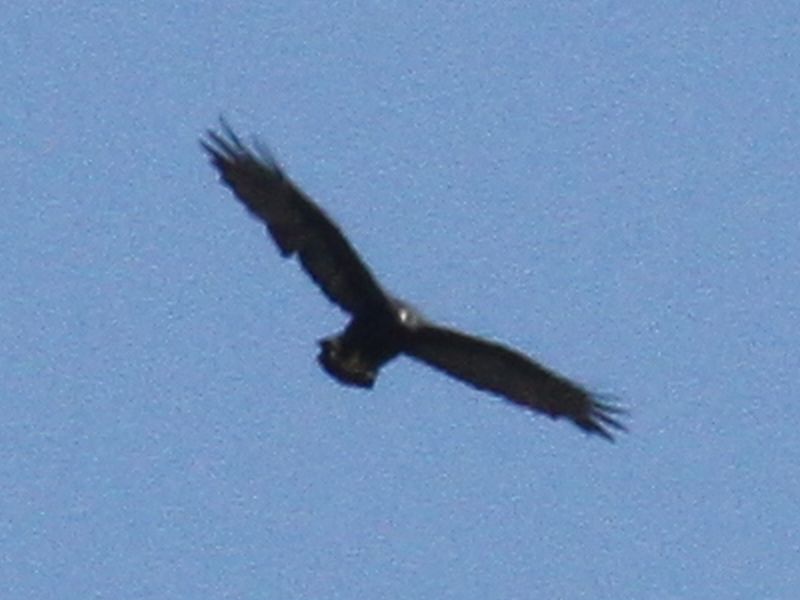 Finally I did get to see the Scissor-tailed Flycatcher at this spot a little while after the hawk came by. A fine looking pink and grey long-tailed missile, it flew right by me coming from north of the store and then landed on the wires going down the hillside. Sometimes waiting around in one spot can be rewarding. I began to sense a bit of a Patagonia Picnic Table Effect kicking in, when finding one rare bird leads to the discovery of others at the same location. Who knows what else might be flying down the coastline?