[All photographs copyright, Gary Nunn 2012] – I am reckoning at least two, and possibly three, White-throated Sparrow Zonotrichia albicollis have arrived at Fort Rosecrans National Cemetery. The first one I encountered on Saturday, a nice “tan-striped” color morph with streaked flanks, shown below entering through the fence, was traveling with a band of Dark-eyed Junco. On Sunday I saw at least one brighter “white-striped” color morph individual that alighted in a small pine at dawn. Later on a very brightly plumaged bird came out on the grass in front of me. Here are three photographs from different times over the past few days and different locations at the cemetery. 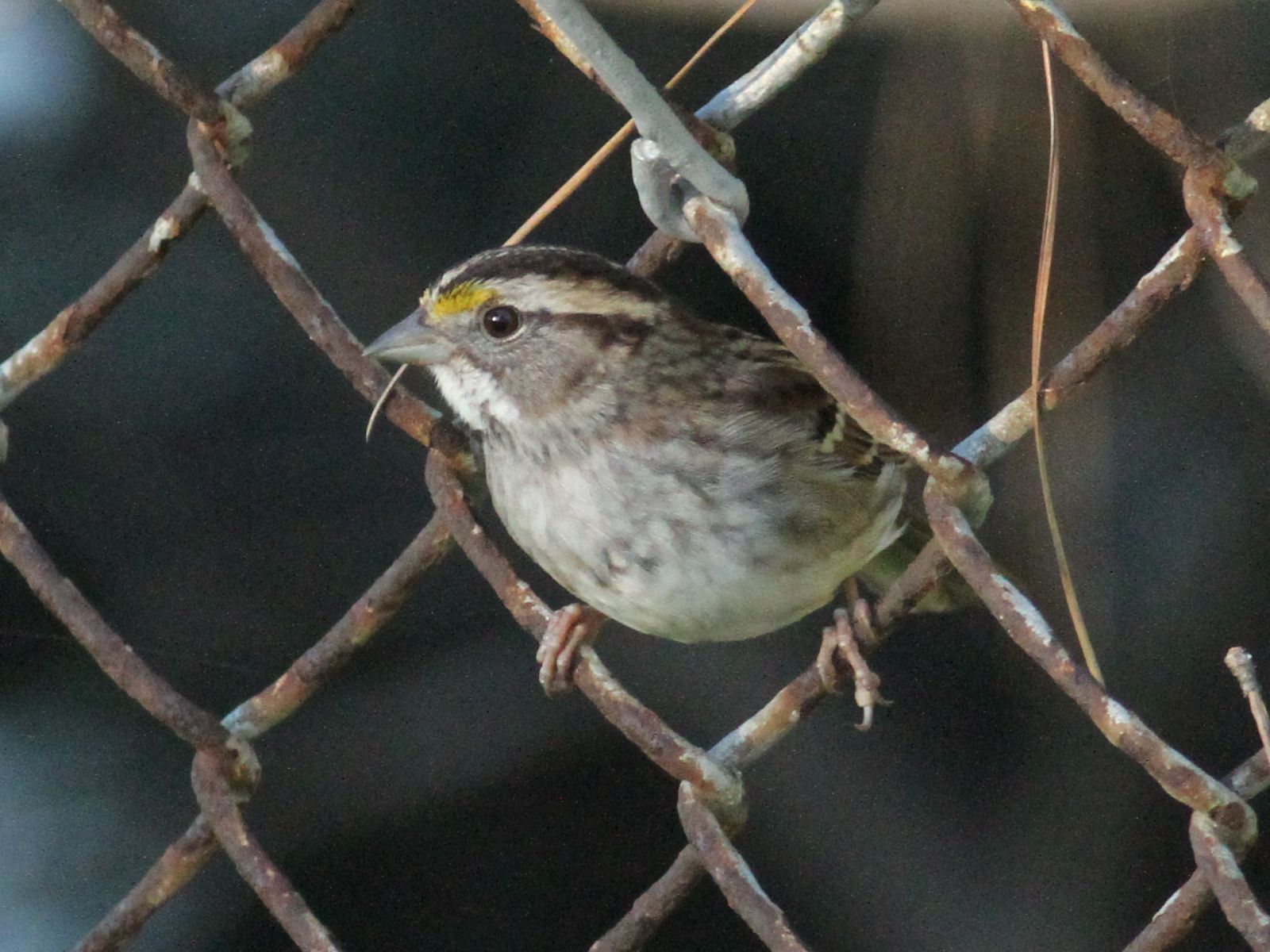 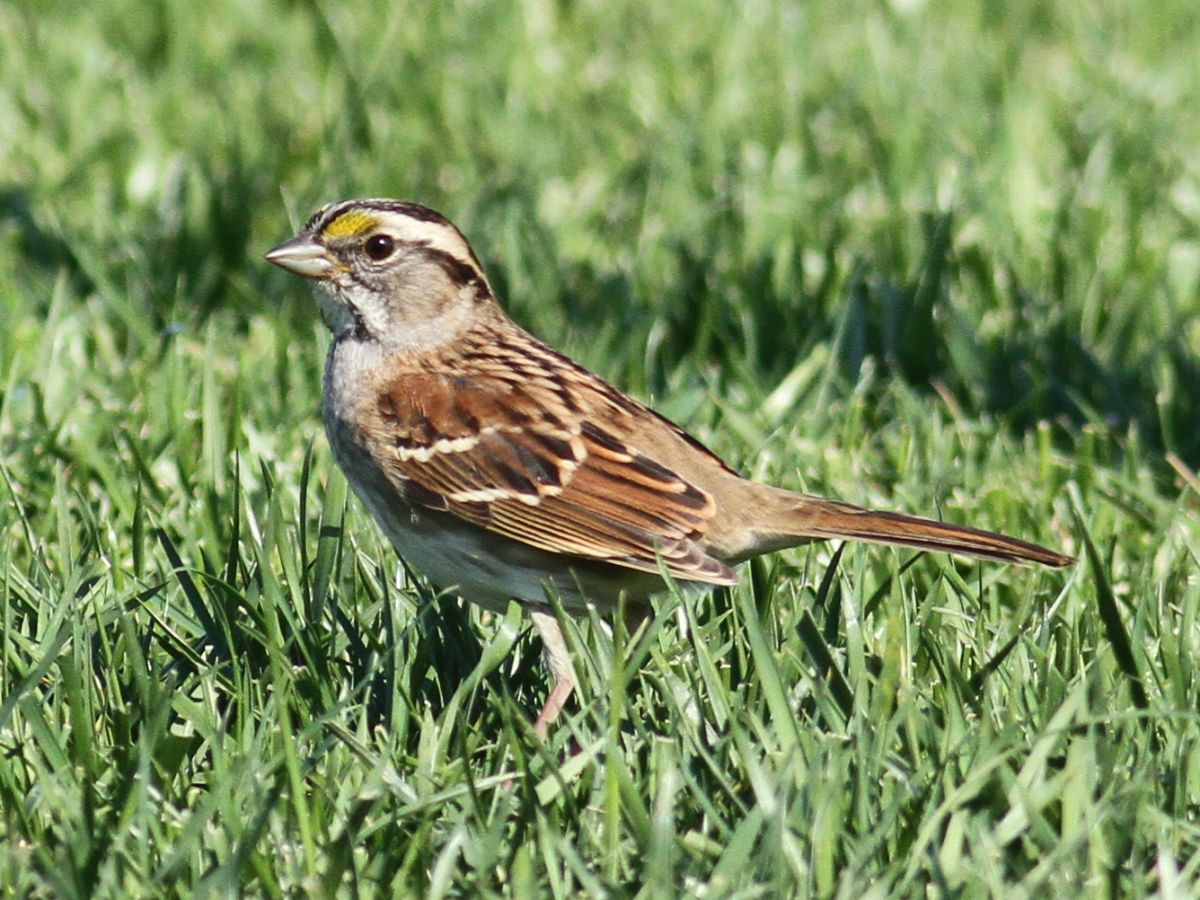 A “warm biscuit” colored Catharus thrush hiding behind the south fence on the east side got my pulse going. Repeatedly scared off by a Hermit Thrush, it eventually plucked up courage to reveal itself – a getting late Swainson’s Thrush Catharus ustulatus. This bird only shows a weak buff eye ring and supraloral. Although a nice warm overall color on the upper parts, and with a buffy bib across the upper chest (not visible in this photograph), the clearly buff flank color points to Swainson’s Thrush and not a much rarer Veery. 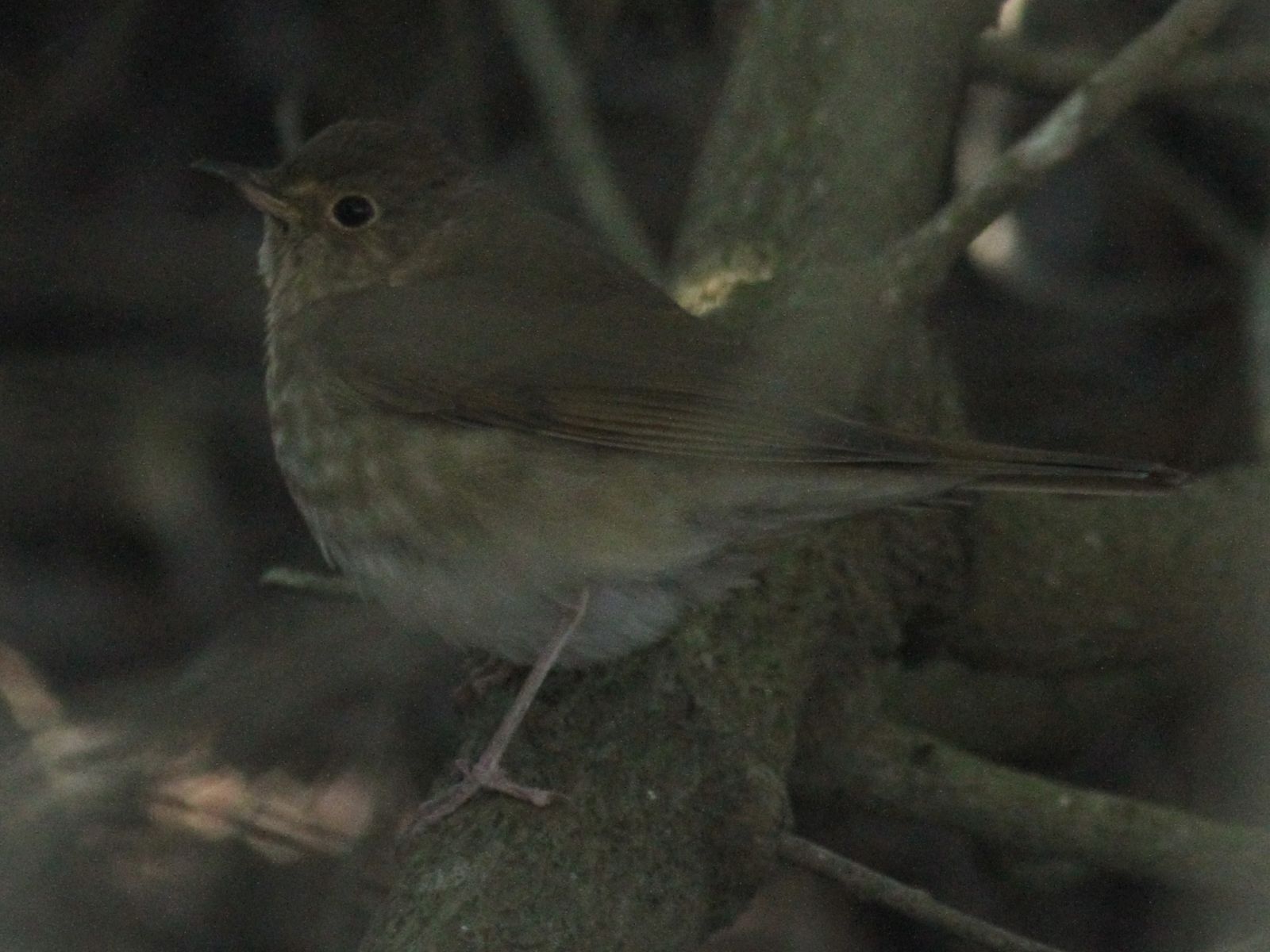 This shaggy maned Western Scrub-Jay Aphelocoma californica shows off the dark purplish blue of the local obscura race found here on the southwest California coast. Freshly molted, I think the local jays look spectacular at the moment. I only noticed later that this individual is sporting “jewelry” on its left leg!

I only detected the first Fox Sparrow Passerella iliaca yesterday behind the southeast section south fence. It was joined today by a second identically warm brown colored individual. Both birds had a slight reddish hue to the warm brown upper part color, evidently part of the “Coastal Northwest Sooty” unalaschcensis group of Fox Sparrows. Difficult to approach they remained so well hidden that I only managed this wary photograph through the fence.

The diversity of types of Dark-eyed Junco is climbing steadily at the cemetery. Over the weekend this nice “Pink-sided” Junco Junco hyemalis mearnsi appeared among the more numerous “Oregon” type. Without even looking through your binoculars this type of junco stands out by its size, it is quite a bit larger than the “Oregon” type. 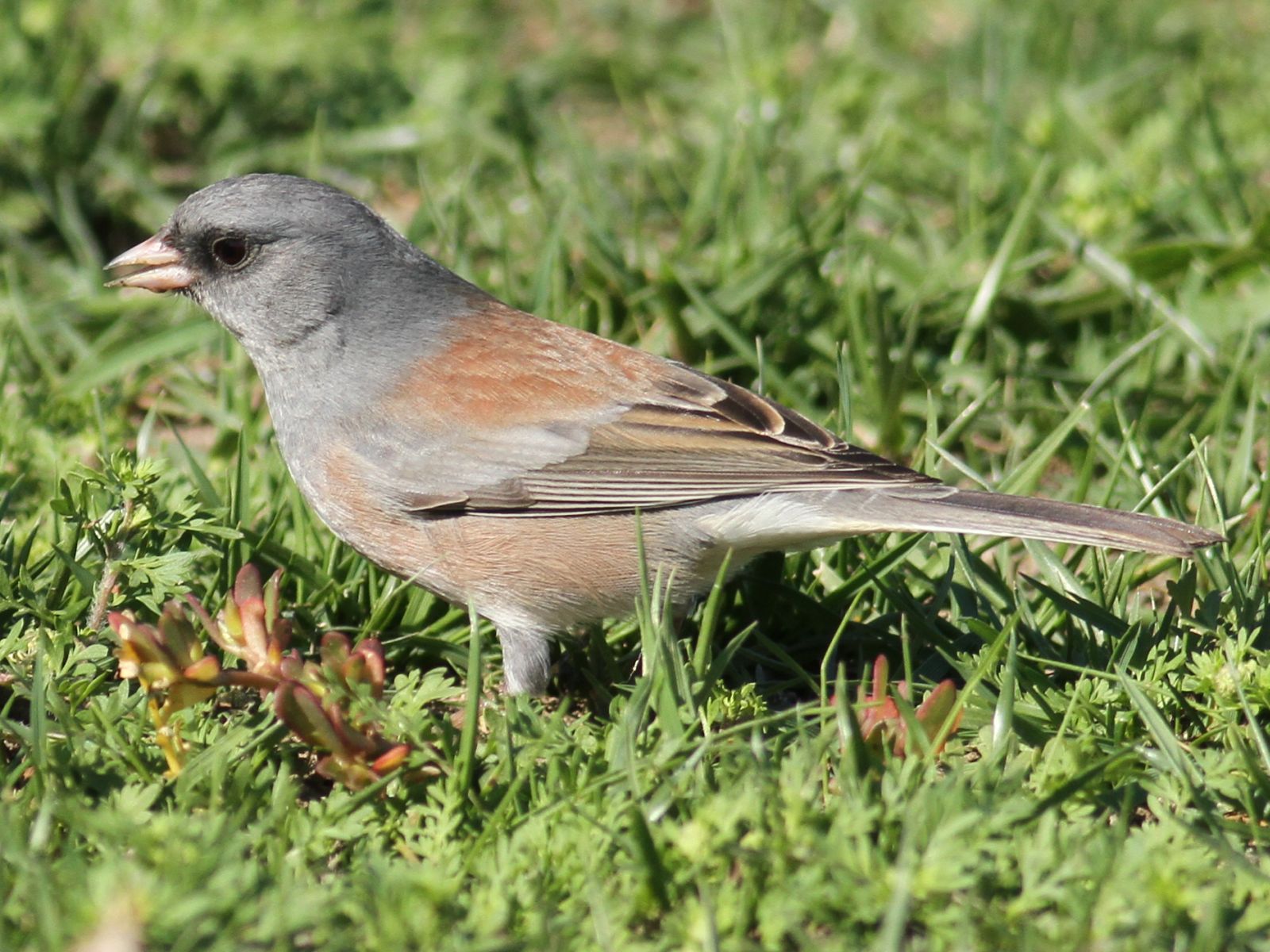 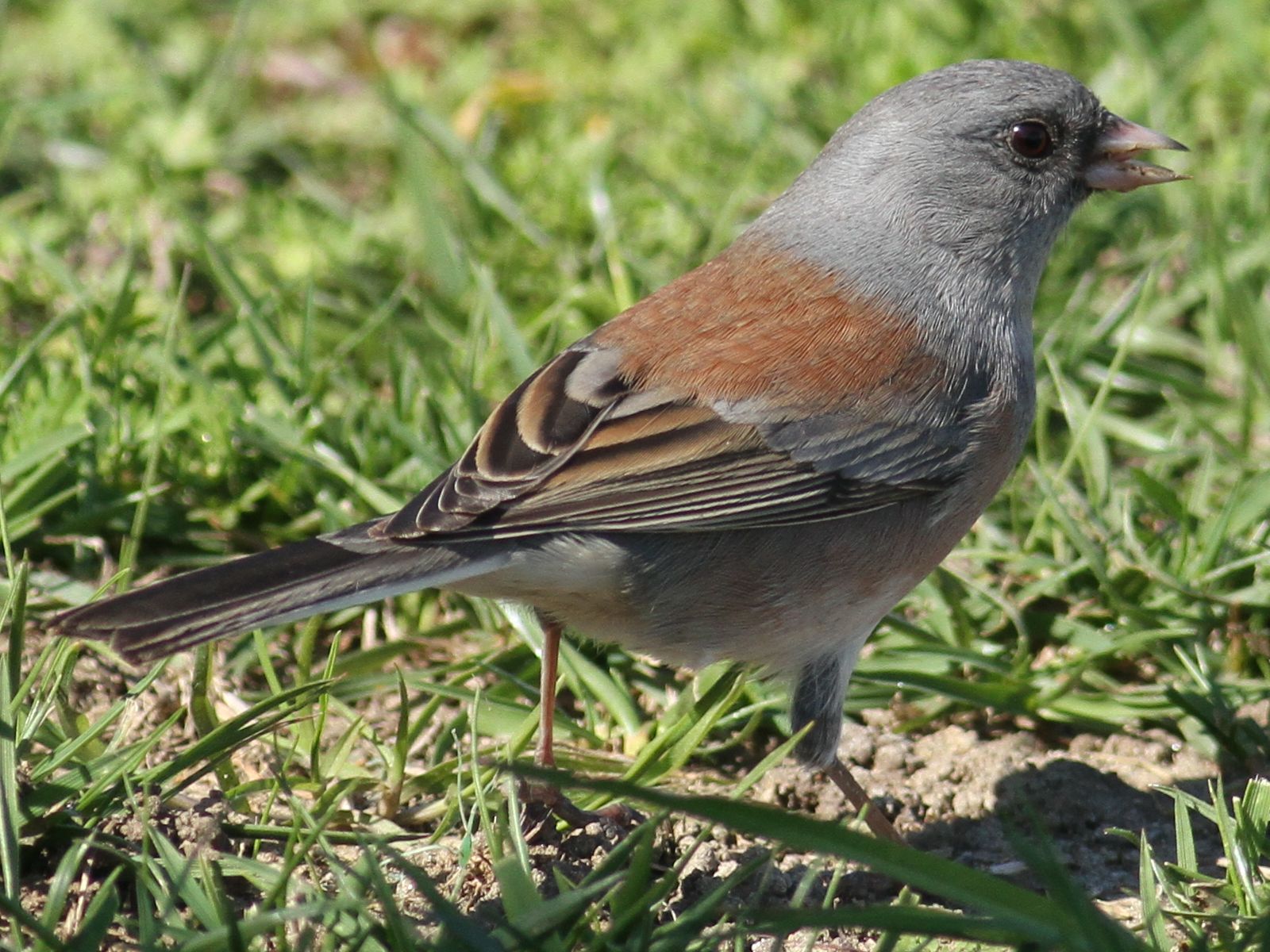 This Pink-sided Junco may be a hatch year (HY) male – it appears to have completed first prebasic molt but retained what looks like a couple of juvenile tertial feathers on each wing (brown edged and tattered looking when magnified). The new molted smallest tertial (s9) matches the color of the other freshly molted greater secondary coverts (pale grey new feathers). 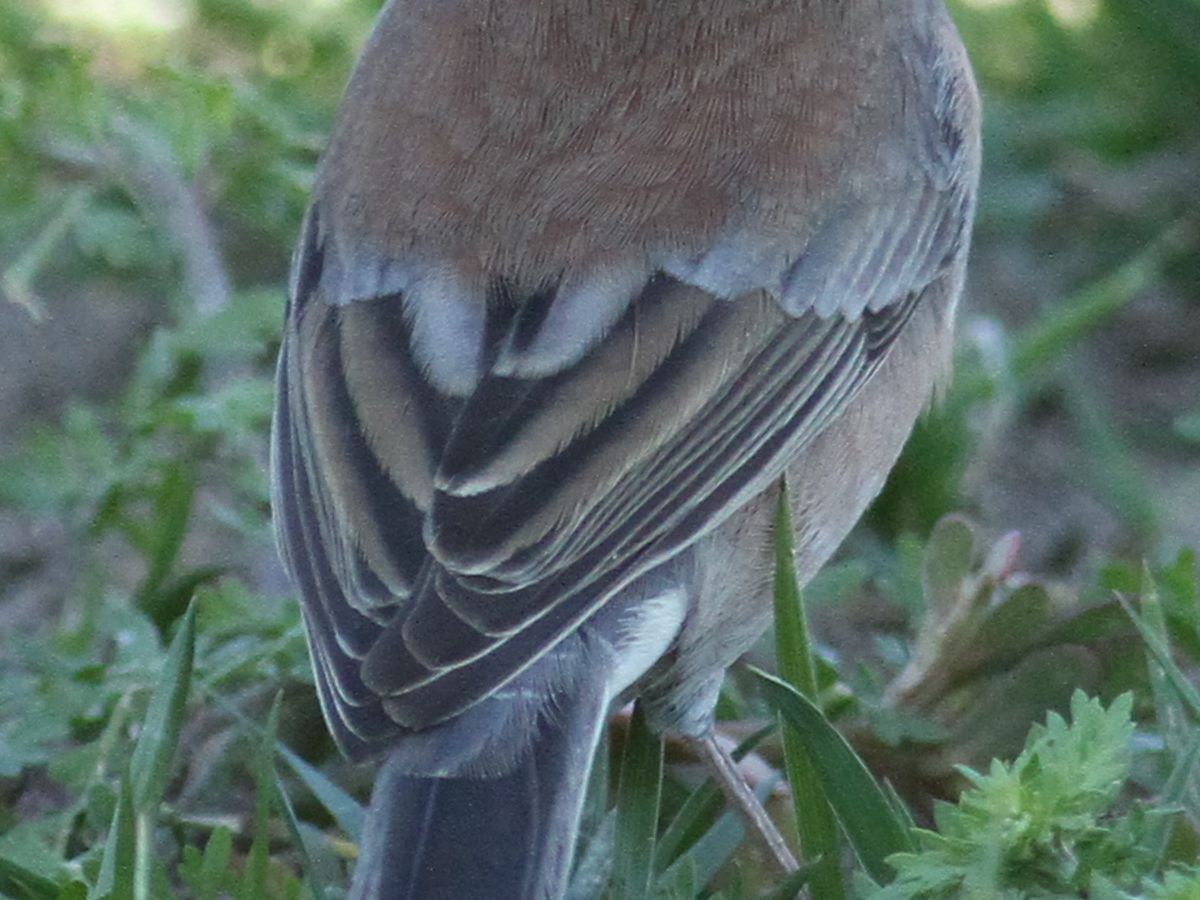 I sat down next to this puddle in the early morning and waited as Yellow-rumped Warblers came to drink. I caught this one alighting at the puddle edge. You can see many plumage details in the reflection as clearly as the actual bird image! In fact if you look closely parts of the reflection show feathers not visible on the bird itself, for example the underside of the tail! 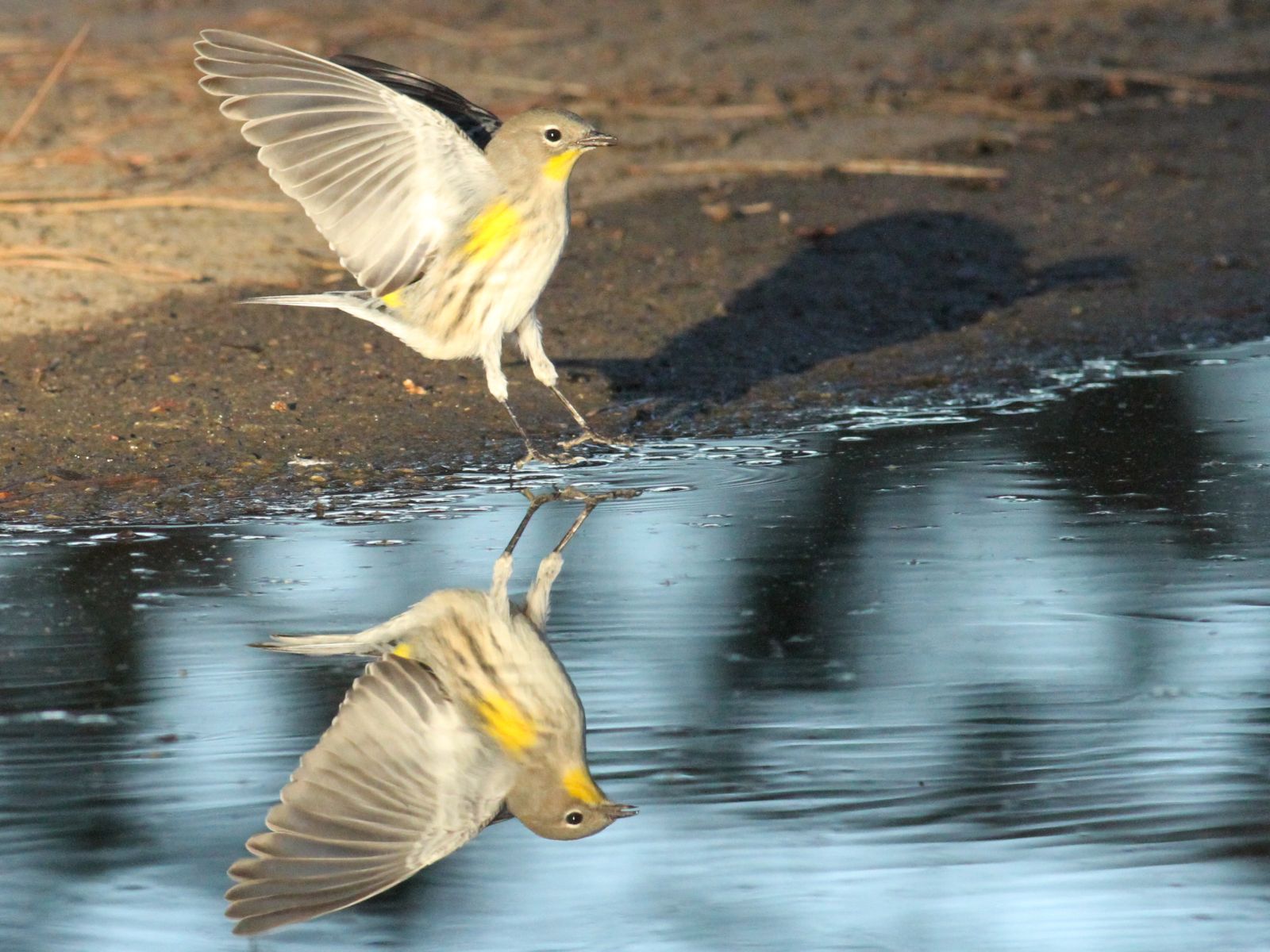