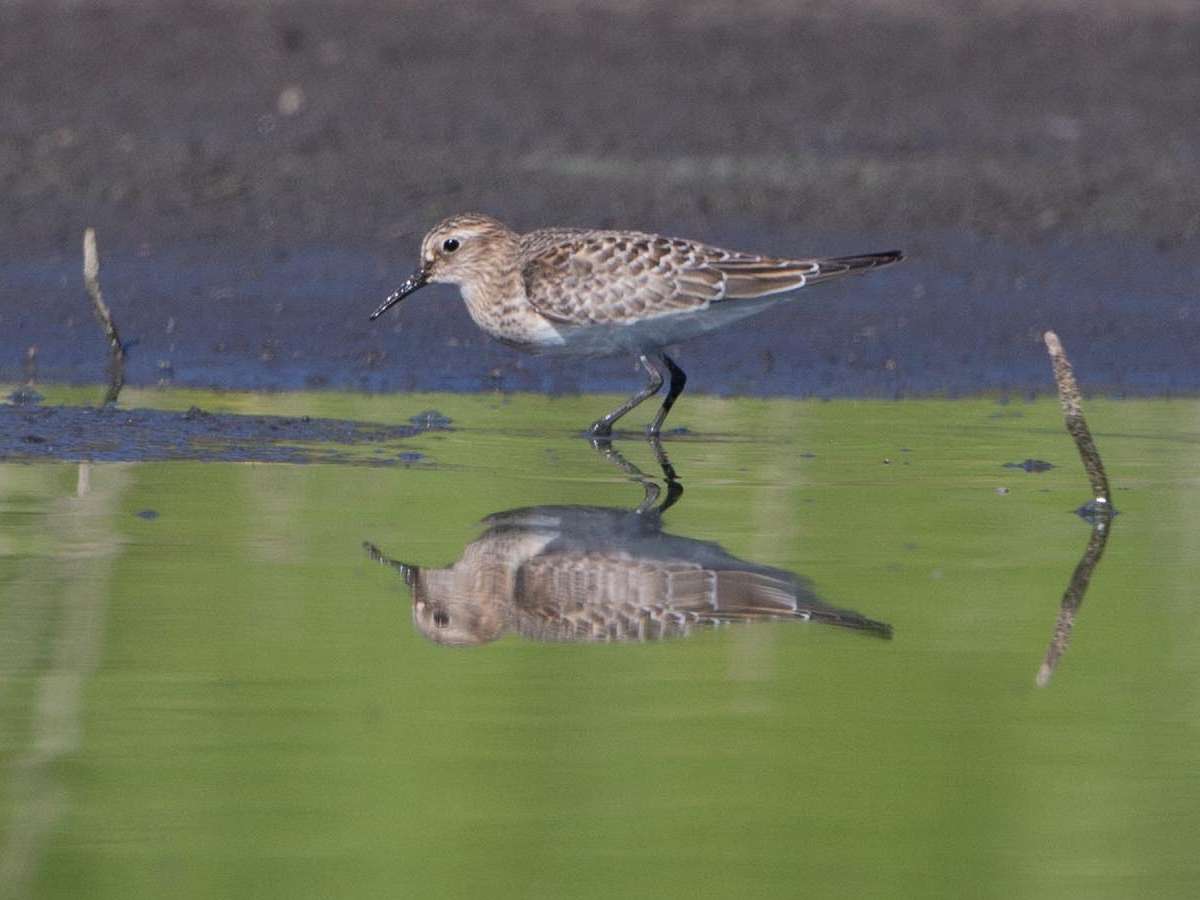 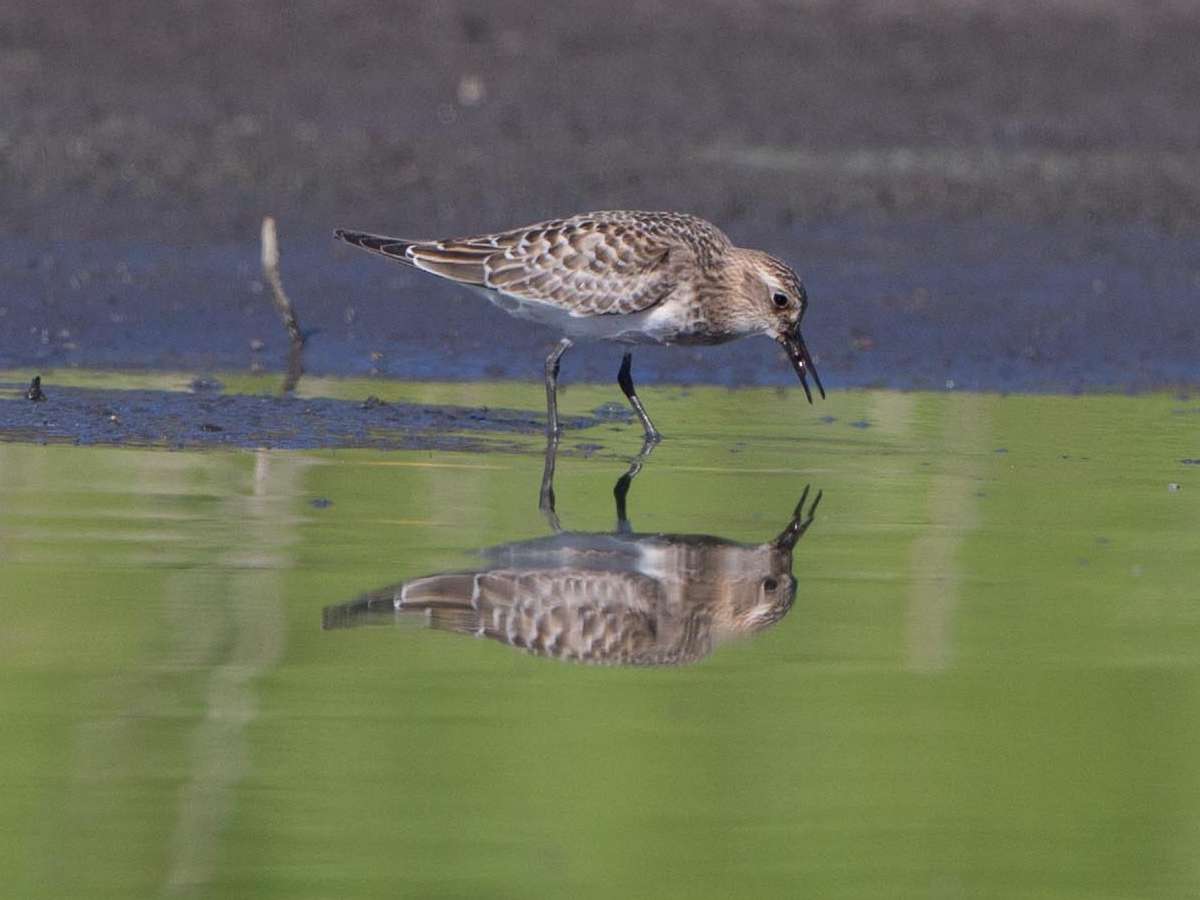 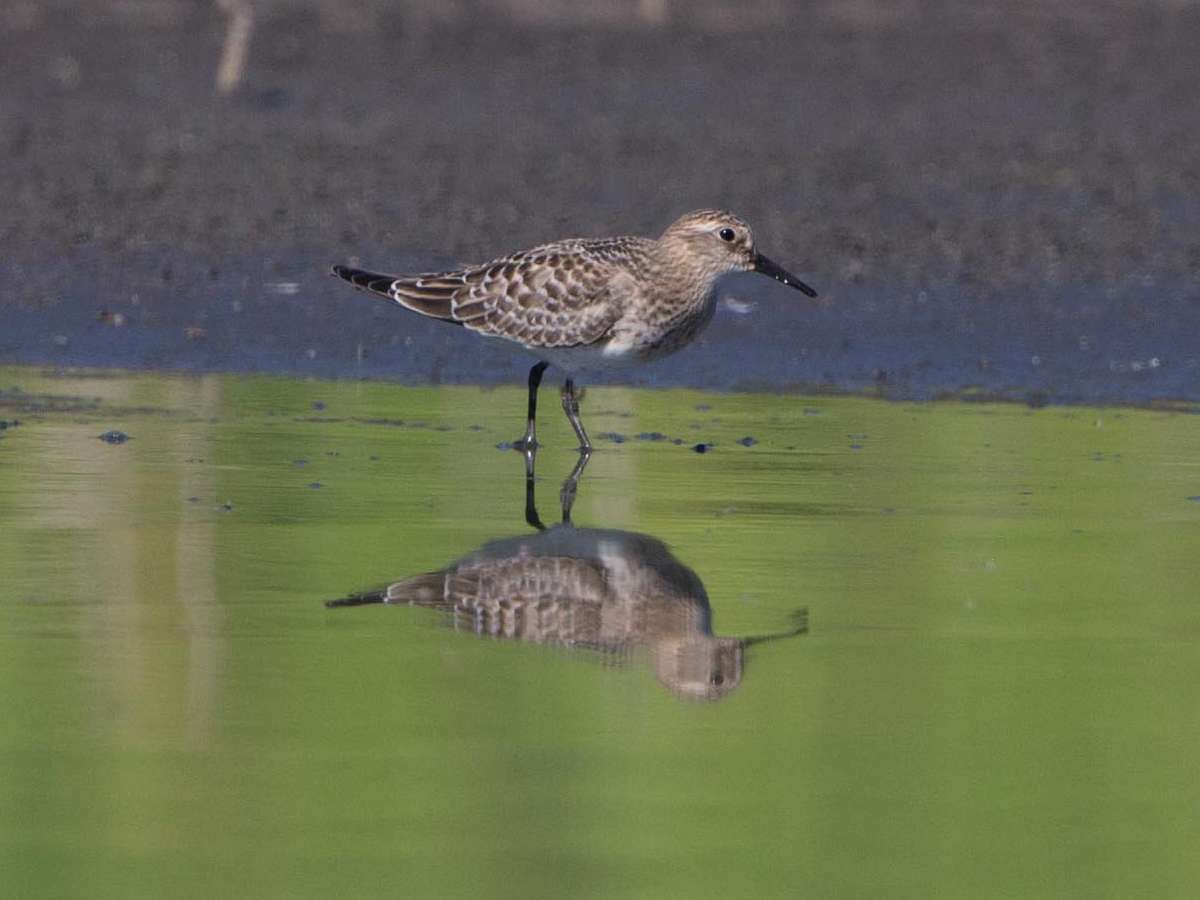 I made an early start and drove out to Lake Henshaw, northeast San Diego County, making good time and arriving before dawn. It was surprisingly cool, in the 50s Fahrenheit, and looked dead still across the lake. Blue Grosbeak Guiraca caerulea were calling, “chinking”, from perches on the grassy slopes, and Band-tailed Pigeon Columba fasciata were making their early morning flights over the oak trees. I quickly called in at the Lake Henshaw Resort and paid for my small skiff which was waiting down on the lake shore with Ruben the boat master. The sun was not yet above the mountains to the northeast when he cheerfully cast me off and I headed out, slowly going west, just after 6 am.

I had not motored far, in fact just over to the dam area, when I spotted a small pinkish-buff colored bird walking daintily along the lake shore. A couple of Least Sandpiper Calidris minutilla were nearby but this bird was clearly smaller in size. Intrigued, I approached and was surprised to find a striking looking plain-colored alternate (breeding) plumage American Pipit Anthus rubescens alticola. This form of American Pipit, sometimes called the “Rocky Mountain” form, is found only in the Western US excluding Alaska, where it is a high elevation breeding species. As far as I am aware, it is practically unknown here in San Diego in the summer months. The warmly colored pinkish-buff underparts had no streaking that I could discern, although later examination of photographs that I took revealed a few tiny dark flank streaks. The upper-parts, including the crown, were a pale grey, with darker grey streaks on the mantle. I managed to get a few distant photographs of this delightful looking bird. 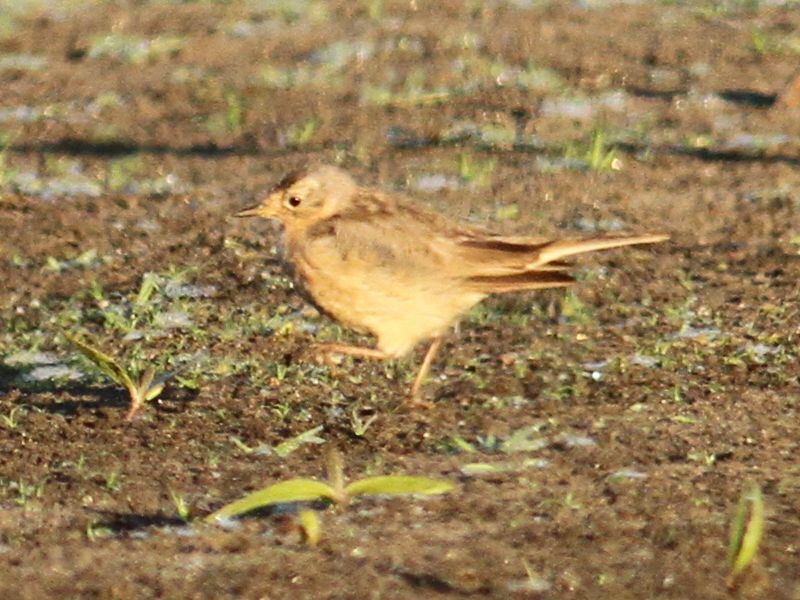 The Sibley Guide does in fact illustrate this striking looking alticola form of the American Pipit, although without describing distribution or taxonomic details. It is quite unlike the dark-streaked basic (winter) plumage individuals we see lots of here in winter which are thought to comprise the A. r. pacificus form which breeds from the Oregon Cascades north to Alaska. Excellent illustrations of this “Rocky Mountain” American Pipit alticola form can be found in the Helm Guide by Alström and Mild – Pipits and Wagtails. In addition an online article at Surfbirds also has precise illustrations by Brian Small.

The San Diego Bird Atlas does not document any records from the county in July but mentions the nearest summering grounds can be found in the San Gorgonio Peak summit area of the San Bernadino Mountains, as well as the Sierra de San Pedro Mártir plateau of Baja California, Mexico. After searching around on the internet I did find an excellent photograph, taken by Tom Benson in June 2011, of the alticola form of American Pipit from San Gorgonio Peak summit area.  This location is just 60 miles away from Lake Henshaw as the crow flies. So perhaps this is a post-breeding wanderer from these nearby higher elevations. 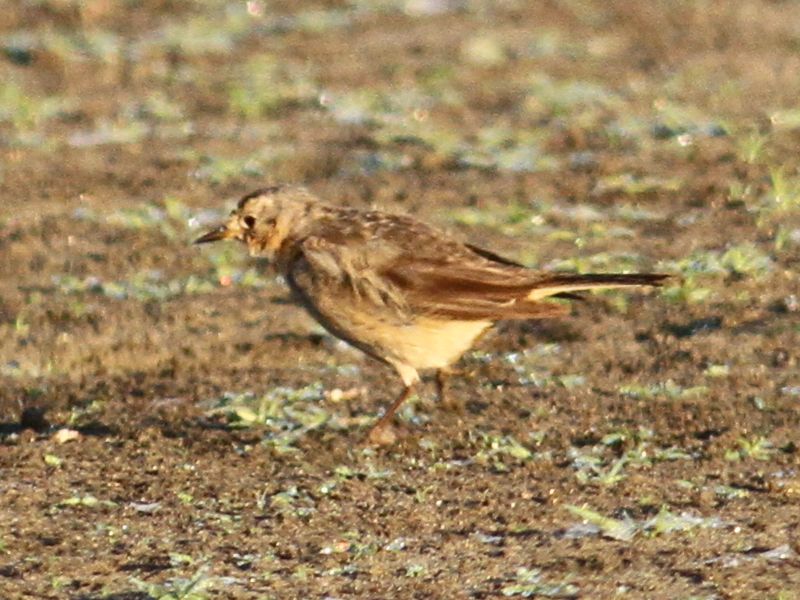 The superficial resemblance of this bird to Water Pipit Anthus spinoletta of Eurasia, in particular the northeast Asian A. s. blakistonii form, is quite remarkable. In fact it was not until the 37th Supplement to the AOU Checklist of North American Birds, published in 1989, that American Pipit Anthus rubescens was recognized, or split, from this widespread Eurasian species. Evidence gathered by Russian biologists pointed to overlap of the two species without interbreeding in the Transbaikal region where they prefer different habitats. Notable field character differences that separate the two include the pale buff colored lores, buff colored fore ear-coverts, weaker bill morphology, and the more gentle looking rounded head of the American Pipit.  The latter field character markedly contrasts with the flatter, more aggressive looking forehead shape of Water Pipit which is also accentuated by this species darker lores. 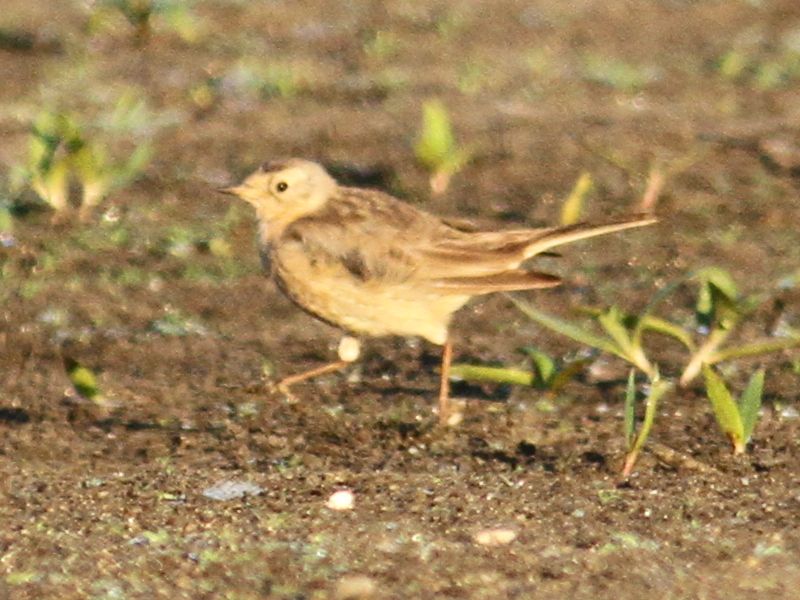 After posting the report on our local SDBIRDS distribution list, I received an email from Guy McCaskie, CBRC Secretary, noting the extreme rarity of this species away from high elevation areas of California in July.  In fact he could not recall a similar record.  Clearly one rare pipit in July in San Diego County.