[All photographs copyright, Gary Nunn 2012] – Cool cloudy conditions with a good southerly breeze felt promising this morning, 11 September 2012, at Fort Rosecrans National Cemetery. I arrived before dawn hoping to connect with a migrant nighthawk but the only crepuscular activity was a Great Horned Owl barking loudly from a nearby cypress. I had looked around for a couple hours finding plenty of migrants and then had the good fortune to find a Dickcissel Spiza americana in the northeast loop section of the cemetery. The heavily streaked chest indicates this early migrant is a juvenile.

It was quietly tucked in with a handful of House Finch feeding on the short turf grass when I first found it. However this situation did not last very long. The resident Western Bluebirds seemed to recognize the Dickcissel as something different and dive-bombed and harassed it off the ground and off it flew! 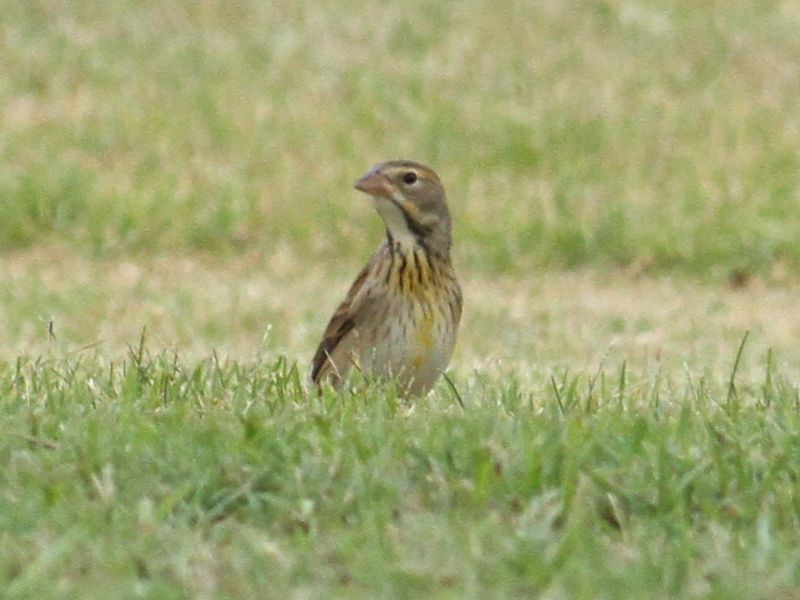 I waited around for a while and was just about to leave when I heard the distinctive sputtering buzz flight call of the Dickcissel returning. I watched it fly in and repeatedly fly back and forth in front of me attempting to settle in to the open lawn. Each time it tried the other birds were on to it and harassed it away, much to my annoyance. In flight it appeared shorter tailed and quite stout bodied – a solid looking strong flyer. Overall it looked a buffy straw color viewed in flight. Finally it landed just a short distance away from me and I managed to obtain a few more photographs of this very nervous bird. 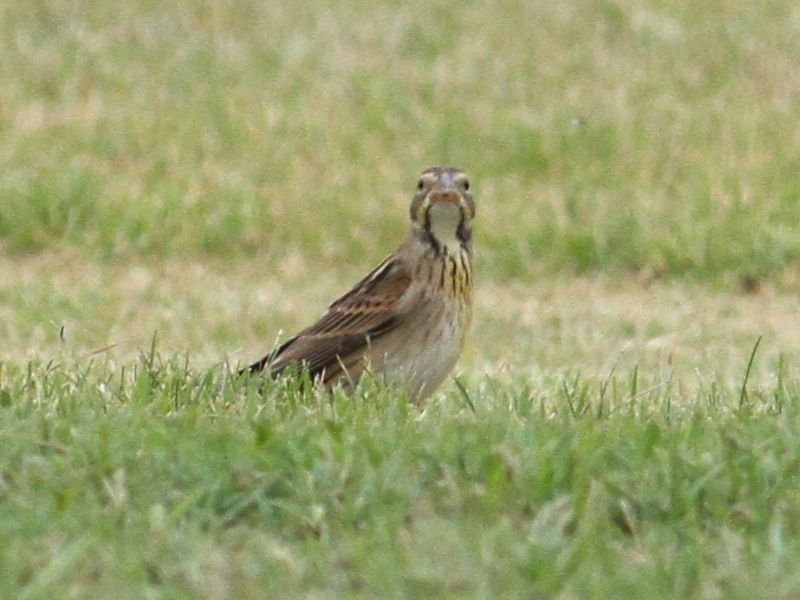 A few minutes later the bluebirds attacked again and up went the Dickcissel. This time it called repeatedly and gained some higher elevation before flying off strongly towards northeast Point Loma. I waited around but there was unfortunately no further sign of it. Here is a good example of the sputtering buzzy flight call which this individual frequently made while flying around (the call can be heard at the start and end of recording).

In a comment on this post, shown below, Paul Lehman points out that early September is a good time for finding vagrant Dickcissel in California. One was heard flying over Mount Soledad, La Jolla by Jay Keller on 12 Sep 2011 and the year before Matt Sadowski had discovered one on 29 Sep 2010 in the Tijuana River Valley. The spread of reports continues into the month of October. I had actually found another Dickcissel here at Fort Rosecrans National Cemetery almost one year ago on 14 Oct 2011. The short turf grass of the cemetery would seem to be the best place to try and connect with this species with several other records here from earlier years. Listen out for that characteristic sputtering call and chase down anything being mobbed by bluebirds!